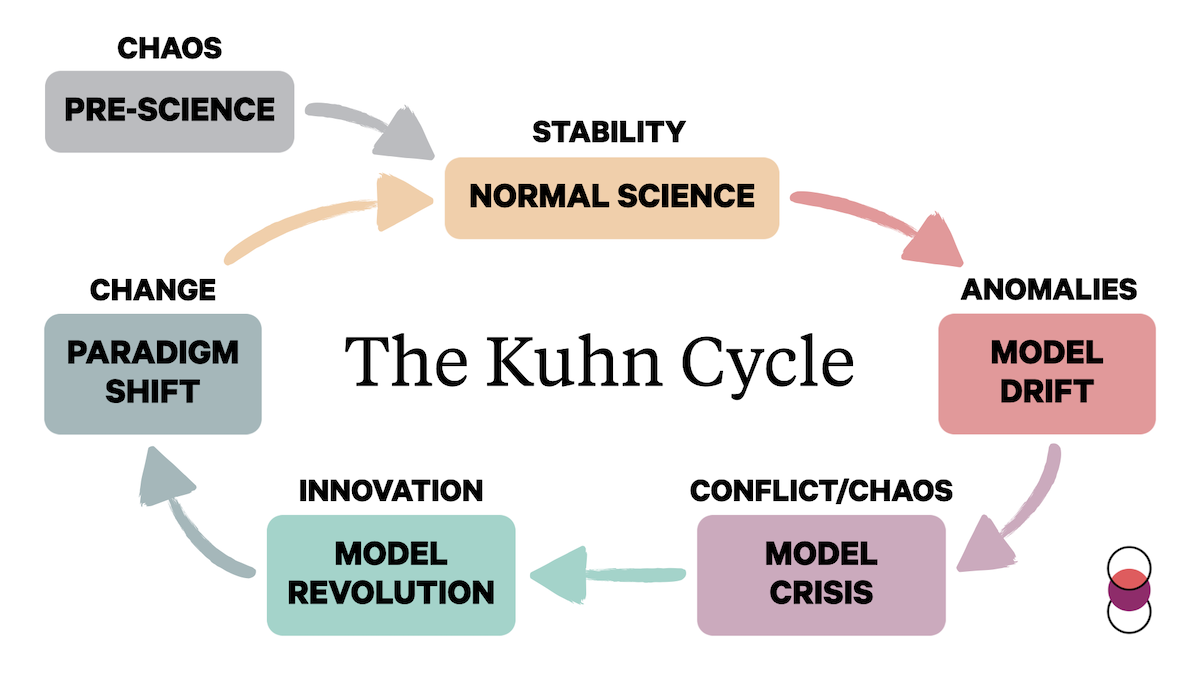 "Paradigm shifts become necessary when the plausibility structure of the previous paradigm becomes so full of holes and patchwork “fixes” that a complete overhaul, which once looked utterly threatening, now appears as a lifeline.”

For many of us, this is where we are with institutional Christianity right now. We need a "lifeline," a better version of Christianity than what we have today.

A paradigm shift is a complete change or overhaul in underlying assumptions. According to Kuhn, these shifts follow a cycle of relatively long periods of stability ("normal science"), followed by a period of often tumultuous, radical change, which then gives way to a “new normal,” a return to stability. Right now, Christianity as we know it is in crisis (Kuhn’s “Model Crisis” stage), a period of tumultuous, radical change. The current model/paradigm is simply not working anymore. It is in steep decline, is full of inconsistencies and contradictions (what Kuhn might call "anomalies"), and at this point, has more problems than solutions.

In periods of model crisis, there will be chaos, confusion, and conflict. Some will point out flaws and poke holes in the existing system, while others will try to patch and plug those holes! However, there seem to be more and more holes and cracks that cannot be fixed from the inside and the structure is beginning to crumble. There comes a point at which we must begin building new structures before the existing one becomes no longer inhabitable. Many have already left and cannot go back to the way things were. The only way to go for them is forward but to where?

We need change but how does it actually happen?

Critiquing, poking holes, and sometimes even tearing things down can be necessary parts of the process but they are not enough. We cannot live among ruins forever. We cannot remain in chaos and confusion. We need some way of making sense of things, a unifying theory or roadmap. We need shared stories, culture, and beauty. We need community and celebration. We must move beyond reactivity to creativity. Thus, the only way real change can come about is if a better alternative to the old way of doing things emerges–a new paradigm or what Kuhn calls, "Model Revolution."

In other words, if we want to see a paradigm shift happen in our lifetimes, we must not only ask, “what are we shifting away FROM?” but “what are we shifting TO?” What is the NEW paradigm? What will the next iteration of Christianity look like? Of course, no one knows for sure yet but that's why we need the work of spiritual and social innovators to experiment with new ideas and propose new models. We need organic movements from the margins to take lead and challenge the status quo. And we need creative and generative conversations that are willing to rethink and reimagine things from the ground up.

New Wine Collective is a laboratory for spiritual and social innovation. We are proposing a revolution in our model of how we do “church” in the world today. Not a revolution in the sense of a violent uprising, but of a coming around in a cycle–a return to the simple, essential, and basic. Yet, doing it in a way that makes better sense for an increasingly diverse and connected world. We're developing a fundamentally different approach to church–a model revolution. And we believe it could be the key to a better and more hopeful future for everyone.

"...about every 500 years the empowered structures of institutionalized Christianity, whatever they may be at that time, become an intolerable carapace, or hard shell, that must be shattered in order that renewal and new growth may occur.”

It seems we are right on schedule.